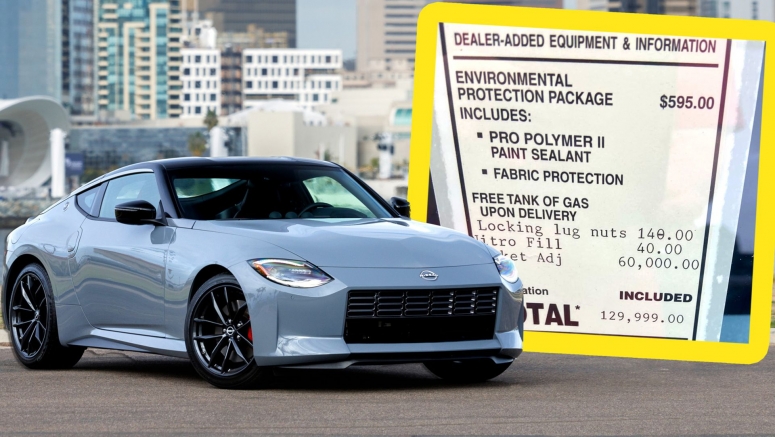 Recently, we told you all about a couple of new Nissan dealers who were placing greedy markups on the supposedly affordable Z sports car. One of the employees of at Scott Evans Nissan in Georgia decided to take to Facebook to confirm and defend the pricing of a Z that was listed at $129,999 including an insane $60,000 ‘market adjustment’ – and who knows what else. He then lashed out at the customers deriding it. We wonder what you’ll think of why he believes the Z should be almost twice what Nissan tells its customers to expect.

Tuesday afternoon, a potential Nissan Z customer posted a photo to The New Nissan Z Facebook group with his disgusted reaction to a $60,000 ‘market adjustment’ on a Z at Scott Evans Nissan. That customer, Dustin Mckeehan, included this caption of the photograph “The Nissan stealership by my house got a Z. I just laughed and walked out.”

The post has garnered almost 500 comments as of this writing and a few of them are from one of the dealer employees. One person, named Skylar Evans, and who appears on the dealer’s staff pages, initially responded with what seemed like an attempt at cordiality. “Thank you for all of the feedback. The vehicle has since been sold. We appreciate the attention both positive and negative. The new Z is an amazing machine so try not to lose focus on that. The car and price is not for everyone and we understand that. Thank you.”

He didn’t stop there though. Responding to a comment stating that the car shouldn’t have a mark up, Evans let loose. His entire comment in lengthy so we’ve put it in one block.

“Why should this car have no mark-up? Do the shoes you wear have markup built into the pricing? Is the food you order and eat marked up or do you have the luxury of purchasing everything at wholesale? At some point the argument of what the car is worth boils down to what someone is willing to pay for it. Porsche, Hummer, Ford Lightening, Ferrari, Toyota Supra and so on have all been offered with markets at some point in time and guess what, the vehicles still sold with no harm or foul to you. If you want a Q60 go buy a Q60. You joined the Z Group page hopefully to celebrate the enjoyment of Z’s as an enthusiast, not as a market analyst whose sole purpose is to shit on those responsible for retailing the vehicles. If you want a Z call me and we can discuss the pricing of a Sport model but you have made it clear the Proto is out of your budget which is fine. Thank you.”

As you might imagine, that comment did not go over super great with those in The New Nissan Z group. “Big retailers don’t mark up shoe pricing because Nike just sells direct. Dealerships rely on government welfare to prevent dealerships from selling vehicles direct to consumers. They’re a parasite.” said one person.

A far more understanding individual offered a bit of an olive branch saying “I have no problem with markups but 100% above msrp is ridiculous. It’s not that most of us can’t afford it, it’s that we’re not stupid with our money.” Another was less kind, “he gets that daddy money from it.”

Putting those comments aside, it seems odd that Mr. Evans would compare a greedy Nissan Z markup to the price of shoes and food. Sure, many, many products have risen due to inflation, but increasing the MSRP is one thing, doubling the price with your own ‘market adjustment’ on top of that is another. As another commenter pointed out, this is not a rare Ferrari that we’re talking about either.

As for Mckeehan, it sounds like he’s going the same route that other prospective Z customers will need to when they realize that dealers are marking up the car so much. “With all this crap it’s making me not even want to buy a Z because of it… the Z was one of the cars I was looking at but that is crazy I guess just to keep looking at some different cars,” he said in a pair of comments. We hope Nissan cracks down on this greedy dealer behavior before it ruins the chance for Z enthusiasts to get a car that was meant to be attainable.