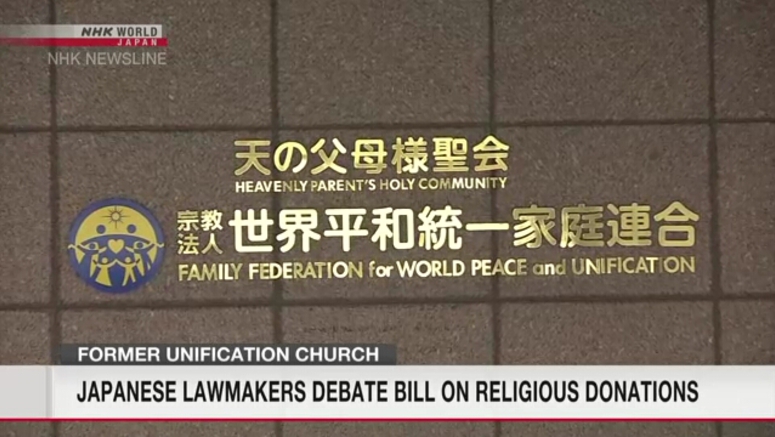 Japanese lawmakers have started debating a bill that would regulate donations to religious entities. They include the group formerly known as the Unification Church.

The legislation would ban religious groups from soliciting donations in an unscrupulous manner. Opposition lawmakers want to revise the bill to ban donations that are made under the influence of so-called mind control.

Constitutional Democratic Party lawmaker Yunoki Michiyoshi said, "The former Unification Church has conducted those acts. By clearly banning them, the group's victims would be able to obtain financial relief."

Japanese Prime Minister Kishida Fumio said, "In many cases, victims would be able to revoke those donations under this new legislation and a bill to revise the Consumer Contract Act."

Japan's Prime Minister also referred to cases where people donated or made promises in a confused state of mind. He said they could exercise their rights to cancel after leaving religious groups if they can prove they made donations under duress.

Kishida said, "An agreement to get part of the donation back, or a document saying they will not ask for a return of donations signed in a confused state of mind could be declared invalid. Those documents could be considered to run counter to decent public practices and behaviors."

Kishida said the legislation would be applied to future donations. But he added the bill could be considered in lawsuits involving damages from the past.