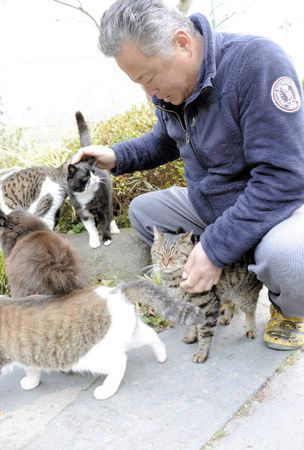 ISHINOMAKI, Miyagi -- Here kitty, kitty! Visitors to Tashirojima Island here will have no trouble finding the fluffy winter coats of the feline inhabitants.

Often called "cat island," Tashirojima, whose perimeter is 11 kilometers, is home to some 200 cats who live alongside human residents, and are no stranger to tourists from both inside and outside of Japan. On a day in mid-December last year, this cat-loving reporter made a visit to the island and its furry citizens.

It takes roughly 40 minutes by a daily, locally run ferry to travel the17 kilometers southeast from the port of Ishinomaki, Miyagi Prefecture, to one of the island's entryways, Nitoda port. As soon as you disembark from the ship, you arrive in a residential area. The second you pull a can of cat food brought along for the journey from your bag, five to six cats immediately come to investigate. They are completely unafraid of strangers. There are even some cats who don't mind being held.

According to those who live on the island -- a mere 64 people as of the end of October 2017, according to the Ishinomaki Municipal Government -- black cats or cats with a black and white pattern are the most common. The descendants of the chinchilla longhair variety brought in from off-island in the past also stand out among the felines. They gather in groups at every spot on the island, from the port to the island's residential areas. The groups gathered around the port are said to have a wilder demeanor, while those operating around the houses are gentler. In the past, the island has generated domestic "star cats" such as the timid and loveable "Tare-mimi (droopy eared) Jack" and more.

The cats are burly from their life outdoors but still undeniably cute. During the 2011 earthquake and tsunami disaster, many of the cats reportedly ran to higher ground and survived. The social group "Nyanko Kyouwakoku" (Kitty republic) comprised of local oyster farmers and others takes on the role of looking after their fuzzy neighbors. The group began as a volunteer network in 2011, with seven staff members who set out cans of cat food and other supplies to keep the cats' bellies full. Ayame Ogata, 85, the proprietor of the lodging "Kaihinkan," commented, "There are other remote islands in Japan called 'cat island,' but the cats on Tashirojima island are the most plump and cute, aren't they?"

In September 2016, the cat republic built a space for visitors to interact with the cats at the former site of Tashirojima elementary and junior high school. At the "shima no eki" (island rest stop), visitors can enjoy a light meal as well as purchase original cat merchandise. "Even though opinions are divided in places like the island assembly, if it is for the sake of the cats, no one objects," said deputy director of the group Yutaka Hama. "That's the kind of precious existence they have enjoyed for so long."

After spending an unforgettable two days on the island, where there is even a Shinto shrine devoted to a cat god, an idea tugged at the back of my mind upon setting foot on the ferry back to Ishinomaki:

Even though 2018 is the year of the dog, how about visiting Tashirojima and searching for your favorite cat? (By Hiroshi Endo, Sendai Bureau)